Corfu town, especially for its oldest part, is one of the most charming and romantic places of all the Greece.

It is a perfect example of ancient Venetian and Byzantine art that will be able to fascinate you with its little streets and its panoramic points.
Surrounded by the sea, the old town of Kerkyra is closed between the two ancient fortresses.
When you arrive by ferry boat, the humidity of the sea hide Corfu town revealing only at the last moment the old houses.
The old Corfu town, built in the past between the two fortresses, has been developed with high buildings as consequence of the increasing number of the population.
All these houses, one next to the other, have been built of local stones, with wooden attics and handmade tiles.
Fortunately the number of buildings damaged by the Second World War is not so big, and today the charm of the old town of Corfu is preserved and can still remind us the past.
During its history, Corfu island attracted attention of many conquerors for its strategic position into the Mediterranean sea.
Also today it's possible to recognize their transit from many historical sites and buildings of Corfu town.
More than a single house, you will appreciate them all together, especially during and after the sunset. 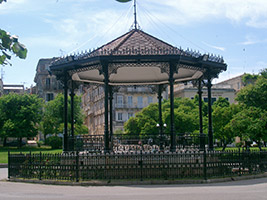 It will be an unforgettable experience to spend hours and hours just walking up and down along thousands of small paved streets, looking around to discover the old town secrets and buying some presents to bring back home.
You’ll visit Kerkyra walking between high old houses, you will buy traditional products in ancient cellars, surrounded by stone staircase, old Venetian walls and hidden gardens.
Every single building, every single street will appear like an open museum, but the joie de vivre of the local people will remember you that the old town is also full of life and full of surprises.
The paved streets and the ancient buildings will bring you to the large beautiful Esplanade and the romantic gallery of Liston; a place that you can’t miss to visit.

The Esplanade of the old Corfu town is a large green area between the town and the old fortress.
Its name comes from the complete absence of buildings that was important during the past to defend the town from foreign enemies. 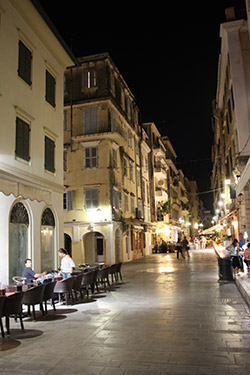 Today a large part of Corfu’s Esplanade is changed into a beautiful public park full of trees and garden seats, while a small part of the Esplanade still hosts the old English cricket field.
Along the west side of the Esplanade there’s also a marvelous building that reminds us the old French occupation: the Liston.
The Liston of Kerkyra was built by the French engineer Lesseps who was inspired by the Rue Rivoli in Paris.
The Liston with its nice gallery full of coffee shops and restaurants is today the heart of the social life in Corfu.
Due to the ancient English domination, near the Esplanade, on the north side, there’s also the Royal Palace of Corfu, called also St. Michele and St. Giorgio palace.
Built in 1820 under G.Whithmore Army General is the only Georgian art example in all the Mediterranean area.
Used in the past firstly by English and then by the Greek Royal Family, today it hosts the Museum of Asiatic Arts, the Historical Archive and the Classic Relics Authority of Corfu. 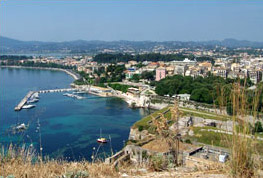 If you will be here at dusk, we would like to suggest you an amazing walk that starts from the St. Giorgios Arch, next to the Corfu Royal Palace.
As you will pass the great arch, you have just to follow the road that runs alongside the sea which will take you down to the entrance of the old town of Corfu.
This road follows the ancient walls of Kerkyra, a marvelous sunset will be in front of you and you will pass near historical buildings such as the church of Panaghia “Antivouniotissa”, the Byzanthine museum, the old port and the ancient arch of St. Nicholas.