The Feasts in Corfu


All the most important festivals and events of Corfu have religious connotations.
Orthodox religion (almost all the population) and Christianity (only 4% of the population) form the basis of Corfiots' culture and the major holidays are associated with the worship of Christ or the commemoration of the Patron.

The town festivals and the holy days are numerous in Corfu island.
Down here you will see the dates of the most important summer festivals.

- Beginning of May: Orthodox Easter, so beautiful to be famous in all Greece
- First Friday after Easter: town festival in Paleokastritsa
- 8 May and 15 August: festival in Kassiopi with the celebration of the Virgin

- 9 June: festivals in Alikes of Potamo, Petalia, Zigo, Potamo
- 12 June: St. Onofrio's Day celebration in Pelekas
- 24 June: Festival of the Holy Spirit, town festivals in Kontokali, Stavro, Arghirades, Kastellani of Mesi, Antiperni and Othoni
- 29 June: Saints Peter and Paul. Festivals in Kombitsi, Stronghili and Vitalades. In the main town of Paxos island (Gaios) there are great celebrations in honor of

- 6 August: Church festival held in commemoration of the Transfiguration of Jesus  in Pontikonisi, Perivoli, Strinilia, Evropuli, Paleochori, A. Deka and Aghios Mattheos with many days of pilgrimage (1-6 August) on the top of Pantokratoras mountain
- 11 August, first Sunday of November, Palm Sunday and Holy Saturday: In these four days the relics of the Saint are carried in procession along the streets of the city where the festival is being celebrated, accompanied by the most important musical bands of the island.
- 16 August: Three days of celebrations in Kato Garuna
- 23 August: Festival of the Virgin Odighitria in the villages of Gastouri, Pelekas and Aghii Deka

- 8 September: Town festival in Afra, Marathia, Aghio Marko, Potami of Lefkimmi and Sinarades.
- 14 September: feast of the Cross in the monastery of Saint Ioanni in Sidari.
- 24 September: " Mirtidiotissa". Festival in Vato.
- 26 September: St. James theologian. Festivals in Karussades and Remunda.

In Corfù, as in the rest of Greece, the name day is more important than the birthday.
The choice of personal names is important for Greeks, in fact they always give to the new babies the names of the grandparents in their memory.
Moreover the name days are well-known since the Greek names are all present in the calendar as names of Saints, while is more difficult to remember all the birthdays.
For this reason everybody, in their name day, prepare a banquet for those who will pay a visit to give wishes.

Carnival exist since antiquity and at the beginning was a festival in honour of Bacchus, the God of wine, in order to pray to have a rich harvest.
Later the Venetian domination contributed to change the customs of Corfu and to introduce the masks, the coloration of faces with ash and new characters like the dotori (doctors), the nodari (notary) and the muzeta (musetti).
Today the carnival is truly felt, the floats are prepared months and months before and people dressed in clothing characteristic of past and present of Corfu island.

The Carnival in Kerkyra consist of:
- Rehearsal parade of floats through the city on the first Sunday, the Sunday of the Prodigal Son
- The last Thursday before Lent (Tsichnopempti) is dedicated to gorge oneself with meat before the period of Lent
- The last Thursday of Carnival, in the old city, there is the traditional ritual of "Petegolia" that consists of seeing women appear at the windows buzzing in dialect about all the Corfiot events.
The event is accompanied by music and songs.
- The official parade takes place the last Sunday and is called the parade of "Sir Carnival".
Sir Carnival is the bringer of all ills and misfortunes in the year just past, so at the end of the parade, he is burnt in retribution to launch then dances, songs and amusements.

During the Carnival there are also two local rites:
- The "dance of priests" takes place the last Sunday of Carnival in the main square of Episkepsi, which is a village in the north part of the island and little more south than Acharavi.
This rite would go back to 500 B.C. and it is a dance without music in which the men of the village, in order of age or role in the community, follow the Pope who has opened the dancing. 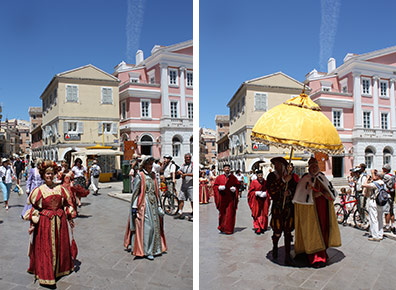 The verses sung first by the Pope and then gradually by all the men give the dance its rhythm.
At the end the old women join playing and dancing together with the men.
- the carnival wedding is a rite still present today in Klimatia, Chlomo, Marathia, Kritika and Iannades (once it was present in all the villages of the island).
It takes place the last Sunday of Carnival and consists of the celebration of a wedding with both bride and groom men and the dangerous presence of the demon in the form of satyr. The reason of the two men is that in the past the women could not celebrate the festivity.
During all the celebration the inhabitants of the town make fun of themselves and joke using vulgar language.

The Easter of Corfu is famous in all Greece because there is a big festival in the old city with music, dances, banquets and naturally religious celebrations.
In Corfu Catholics and orthodox celebrate the Easter together since 1964, when the catholic bishop of Corfu demanded it and got a positive response by the Holy See.
Below there are the most important days of the paschal period with all that happens on the island and particularly in the old town.

It is one of the days dedicated to the Saint patron of the island.
In memory of the miraculous actions that saved Corfu and its inhabitants from the plague, his relics are carried along the streets of the city starting from the church of Saint Spyridonas and following the line where once there were the walls of the city.

Since 1989, on Holy Wednesday, there is the concert of the Communal Chorus in the theatre of the city.
Obviously there is ecclesiastic music to create a moment of union for the community.

In the Catholic Cathedral of the old town there is a reading of the Gospels during which the twelve candles that were lit at the beginning of the service are put out one by one.

Music is everywhere because it's played by the bands during the processions that leave from every church of the island.
The aim of the processions is to carry the Epitaph of own parish along the roads of the quarter, all that accompanied by the music of the bands.
So it's possible to listen along the roads of Corfu the Adagio of Albinoni, the Funeral March of Verdi and that of Chopin.
The processions do not begin all at the same time, indeed they are distributed along the afternoon and the evening in order to allow the several bands of the city to attend more processions; the first one start from the new fortress and the last one from the Mitropolis.

This day is rich of events:
- in the morning, in the Church of Our Lady of Strangers, there is the reproduction of the earthquake that followed the resurrection of Christ
- the procession of Saint Spyridonas that starts from the homonymous church
- the celebration of Resurrection
- the ritual of "Botides" that consist of throwing from the windows earthenware jugs full of water.
In the evening there are the church services, first the catholic and then the orthodox one that takes place not inside the church but outside.
When the Pope announces the God resurrection everybody lights own candle and suddenly the Spianada lights up.
At the end of the ceremony there are the fireworks and the bands play walking for the roads of the city while all the inhabitants celebrate finishing the fast with sweets and wine.

Sunday and Easter Monday
Sunday morning, in the old town, there are still processions with the icon of the Christ resurrection, while Monday they bring in procession the standard and the cross of own church.
Finally everybody celebrates with own family having a lunch with meat, lamb on a spit and "avgolemono" soup.

Sunday morning, in the old town, there are still processions with the icon of the Christ resurrection, while Monday they bring in procession the standard and the cross of own church.
Finally everybody celebrates with own family having a lunch with meat, lamb on a spit and "avgolemono" soup.

St. Spyridonas is the Saint Patron of Corfu island and for this reason he is celebrated, prayed and acclaimed by Corfiots.
Their relationship with the Saint is very close because they see him like their saviour, they feel him like one of them, a real defender. 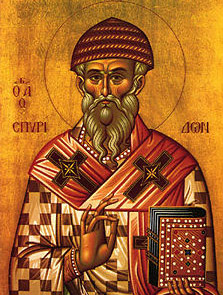 Saint Spyridonas was born in Cyprus, he is not Corfiot and he never lived on the island; he arrived in Corfu only after his death because Georgios Kalocheretis carried here his relics.
His relics are considered the reason for which the island was saved from the Turks, the plague and the famine.
For these miracles Saint Spyridonas was proclaimed patron of Corfu.
In the old town there is a church dedicated to his memory that contains his relics.
Spyridonas is celebrated four times by Corfiots, in order to commemorate the four miracles that he has performed for the islanders:
- Palm Sunday to remember that in 1630 he has saved the island from the plague; his relics leave from the church of Saint Spyiridonas and go around the old town along its walls.
- Holy Saturday, there is a procession in memory of the escaped famine of 1550
- The first Sunday of November, there is a commemoration for the salvation from the plague in 1673
- 11 August, there is a procession in memory of victory against the Turks in 1716.