The fortresses of Corfu town

The historical centre of Corfu town is delimited by the two fortresses.
Along the east side there’s the ancient fortress on the sea, while on the west side there’s the new one.
During the past the two fortresses of Corfu were linked by large walls, so that the inhabitants could live safe inside.
The walls were destroyed and today there are only two of the four gates of the town.
One is called “Porta di Spilia” (Spilia gate), known also as Boati arch, just in front of the old port.
The second one is the gate of San Nicola, placed under the level of the coast road, at the end of the Esplanade.

When during the VI century the old town of Corfu placed in Kanoni peninsula (the Paleopoli) was destroyed by the invaders, the survivors decided to build again the town but in a safer area. Later the town has been preserved by the creation of a fortress around it: the OLD FORTRESS that takes up all the small island at the east end of Corfu town.

The entrance of the Old Fortress is placed just in front of the Liston, near Corfu’s Esplanade.
You will be impressed by the massive bastions, a real masterpiece of military architecture in old times.
To get in you just have to cross the short bridge that links the fortress with the town of Corfu. The large ditch that divides the fortress from the town is used today as a docked for fishing boats.
A short visit let you understand why this area was the ideal place to create a fortress. 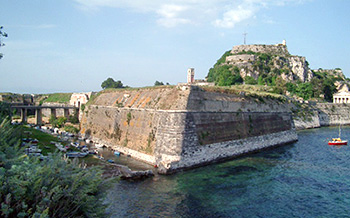 As it is surrounded by the sea, the fortresswas in fact used both to defend Corfu town, and to check the near coast.
The creation of this fortress was started under Byzantine domination and later, under the Venetian occupation, was changed the structure to defend better Corfu town from Turkish.
Venetian people, during their occupation, worked also to make the ramparts stronger and smooth.
The statue in honour of Commander Schulenburg (built by Venetian to remember the battle against Turkish) is just near the bridge that will take the visitors inside the fortress.
From here by a covered stair you can access to the hearth of the citadel.

A hallway on your left will take you also to the higher part of the fortress.
At the end of the hallway there’s also a small path that conduces to the ancient barracks, while along the south side of the hill you can visit the little church of St. George.
This little church was built in 1840 by English an later has been adorned with icons coming from St. Spyridon church still present in the old Corfu town.
Inside the fortress there are different buildings such as a prison built in 1786 by Venetian and made it bigger in a second moment by English.
Not far from the prison you can also visit the military church called “Madonna of Carmini” and an ancient military hospital converted today into a music school.
Inside the fortress, near the principal gate there’s the historical archive that gather up more than 6 centuries of Corfu history.
Inside this archive there are many old documents and the Corfu Byzantine Collection that includes icons, sculptures and paintings of the Byzantine period.
Apart from the historical and cultural point of view, the Old Fortress offers also a stunning view overlooking the town of Corfu and the Ionian sea between the island and the mainland.

The new fortress is massive and you can see it on your left when you’re arriving in to the port with the ferryboat.
Under the supervision of the Italian architect Francesco Vitelli, the New Fortress of Corfu was built between 1576 and 1645 and many buildings were crashed in order to have enough material to build the fortress.

It was partially destroyed during the Second World War but the new fortress is still lovely with its old paved access road and its gate with the ancient lions that are the Venetian symbols.
The new fortress is placed just above the old port and it’s full of underground tunnels that run till the old fortress and the old Corfu town.
Maybe less fascinating than the old one, the new fortress deserve to be visited just for the marvellous view you can have from its top.
Recently the fortress has been renovated and today gives hospitality to many exhibitions of painting, photography, sculpturing and music concerts.