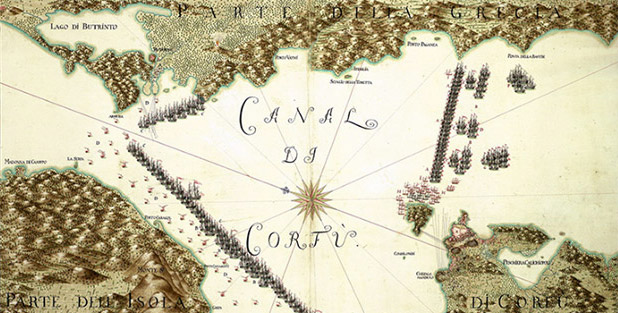 Also Apollonio from Rhodi in his opera “Argonauti” gives importance to Corfu island, where Giasone and the Argonauti had a stay during their long travel.
Kerkyra has been also mentioned into The Odyssey of Omero with the name of Scheria.
Ulisse, escaped from Calypso, found the opposition of Poseidon, the God of the sea, before going back home. Poseidon changed his ship into a rock, so Ulisse had to search help in Scheria island, that was under Feaci
occupation.
Nausica, daughter of Alcinoo the King of Feaci, while she was going to the beach with her slaves to clean cloths, she met Ulisse, she gave him help and took him to discover the beauties of the island.
There are many legends about Corfu, especially regarding the origins of the name Kerkyra, the Greek name that is used today for Corfù.
During ancient times the island had many different names as for example Makris (long) due to its shape, Drepanon (sickle) because looks like the agricultural tool, and Scheria as the God Poseidon, on Goddess Demetra request, stops the “schin” (alluvial deposits) to keep the island far from the mainland.
During the Centuries Corfù took many other names, till Kerkyra that comes from the legend about Kerkyra nymph.
Kerkyra was a nymph born from Asopo river and who received the love from Poseidon God who took her to the island and gave to the island her name.
From their love was born Feacas, progenitor of “Feaci” population.
Many scholars think that the myth of the Kerkyra nymph is connected with the Byzantine word "Koryfò", ensued from the “Acropoli” situated in front of the modern town.
From the word “Koryfo” comes the Latin name Corfou or Corfu that’s the modern name given today to Kerkyra island by foreigners.

The first settlements on Corfu island date back to the 775-750 b.C. due to the Eubea island inhabitants. At the beginning of the 730 b.C. in Corfu there were Corfiots and Corinzi, the latter settled in Kanoni peninsula.
Between the two people began a period of harmony that gave prosperity and splendor to the island of Corfu.
During that period appeared own forged coins of the island and the colony of Epidamnos was founded.
The relation between Corfiots and Corinzi was broken when the former decided to support the Democrats and the latter the Oligarchis.
The conflict came to an end after that the Peloponneso War was finished.
In Peloponneso War the Corfiots formed an alliance with the Athenian (375 b.C.) and they could gradually follow their independence.

Waiting for a new period of calm and splendor, Corfu had to defend its own island from many pirates that were bringing violence and terror in all the Mediterranean sea.
Overwhelmed by the brutal attack of the Illiri (229 b.C.), the inhabitants of Corfù asked to Romans their protection.
The Consul Fulvio with his army was received with joy because he rescued Corfu island but he also gave back the most part of autonomy.

In this difficult age in which there were continuous raids of Unni, Ostrogoti and Bulgarians an important event was the spread of the Christianity on the island of Corfu.
This period goes approximately from the 6th Century till the beginning of the 11th Century. During these centuries Corfu was the base of operations of Giustiniano for the campaigns in Africa and against the Goti of Italy.
The Byzantine domination finished in 1081 when the Normans with Robert Guiscard took control of Corfu island.

In 1149 the Byzantines with the Venetian fleet were able to set free the island of Corfu from the Normans occupation.
After different invaders in 1386, with the partition of Greek lands, Corfu became definitively assigned to the Venetian empire.
The Venetian hegemony lasted for about four centuries (1385-1796), period in which the organizational structure of the administration of Corfu Island hark back to the aristocratic regime of Venice.
Therefore the inhabitants were subdivided into 3 different classes: the nobles, the civilians and the populars.
The public instruction was organized by the clergy inside the different monasteries, while the nobles could attend some Italian athenaeums.
Moreover the Venetians thrusted the cultivation of the olive trees establishing important bases for the economic future of Corfu and at the same time getting precious and constant oil supply for the city of Venice.
The Venetian domination has allowed to Corfu to be today one of the few areas in Greece which has not endured in the past the overwhelming hegemony of the Turks.

Once defeated the Venetians, Napoleon Bonaparte with the treaty of Campoformio decreed the French hegemony all over the Ionian islands.
First of all the French invaders burnt in the main public square of Corfu the Book of Gold, the list of the nobles of the island, and in the same public square they planted the symbolic tree of the freedom.
The Corfiots felt a wind of rebirth and they accept willingly the new ideals promoted from the French revolution, hoping also that Napoleon could help Greece to get back the freedom.
Anyhow the French hegemony was not really loved by Russian and Turks, therefore in order to limit its power, they instituted in 1800 a treaty that for the first time recognized the State of the Ionian islands like free and independent.
The State of the Ionian Islands passed through a flourishing period and gave birth to Corfu library institution but in 1807 the French re-established their dominance.
For several years Corfiots and French people lived together and in that period Corfu increased its economy and the public education; there was instituted the first Ionic Academy of Sciences and was introduced the printing office.

After Napoleon, many countries were interested in the control of Corfu island but, thanks to the aid of general Ioannis Kapodistrias, in 1815 was signed in Paris a treaty that recognized the autonomy of the Ionian islands with the exclusive control of England.
So the State of Joined Ionian Islands was born and lasted until 1864.
The first english high commissioner was Sir Thomas Maitland, who revealed himself as a strict and repressive dictator very soon, stirring strong complaints from the Corfiots. However the English government was perhaps the most flourishing period in the history of Corfu.
It brought in fact a large development of the economy, the public health and the education.
There was instituted the first Greek University, widened the road network and there was realized a system of public aqueduct.
In those years Corfu had also a progressive development of its commerce with the adjacent countries, especially in 1859 with the last English governor, the colonel Henry Storz.


Freedom and annexation to Greece

The treaty of High power States, stipulated to London in 1863, decreed that England renounce to the Ionian islands and in May 1864 the island of Corfu became finally part of Greece.
Once annexed to Greece, the city of Corfu lost power in favour of Athens, but the rest of the island began to prosper both politically and economically with a widening of the industrial activities.
The increase of the island was also from the agricultural and artistic point of view, mostly under the political guide of G. Theotokis, who was also the first Greek minister for many years.
The two World Wars, carried heavy consequences for all Corfu island; numerous historical, architectonic monuments and various cultural centers were destroyed.
During the Second World War the Italian took the power of the island in a pacific way until Mussolini died.
The 20th Century began in a very hard way for the Corfiots, but they knew how to make useful the splendid nature and the sweet climate of the island in order to begin a new economic development. 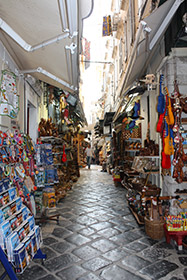 Today Corfu is one of the most fascinating and organized places for holidays of the entire Mediterranean sea.
Fishing and agriculture cover a marginal but important role in the economy of the island that finds in the European tourism its most important economic source.
Its sandy beaches, its colourful bays and its tourist receptivity bewitch every summer thousand of travelers, impressed also by the fascination of the old city and by the old traditions of Corfu that are still alive.
With the modern part of its city, Corfu is today an island full of life also in the winter months, mostly due to the institution of the Greek University of the Ionian Islands.
Together with the tourism there is the production and sale of oil, honey, wine and kumquat that are the most famous local products.
Moreover in the mountain there are still cattle ranches and cheese, milk, yogurt and some cold meat are produced.
Finally there is also the local craft that makes available to the tourists some typical products of the island as objects carved in olive wood, embroidered fabrics, articles in woven straw and wood furniture.