The buildings of the Old Town

Walking in the old city of Corfu you can admire different buildings interesting from an historical, cultural and architectural point of view.

This palace, projected by colonel G. Whithmore, was realized with tufo of Malta between 1819 and 1824 and it's the only example of Georgian architecture in all Mediterranean.
At the beginning was the mansion of the British Governor Sir T. Maitland, then became the summer residence of the Greek Royal Family and recently was restored with a view to the European Union Summit (1994). 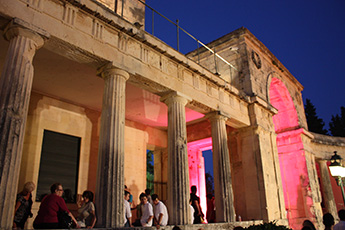 In the past it was the seat of the Order of Knights of Saint George and Saint Michael, from which the palace takes his name, and then the seat of the Ionian Republic Senate.
Today inside the palace there are the Museum of Asian Art, the council art gallery and the Department of Classical Antiquities of Corfu.
From the architectonic point of view the Palace of Saint Michael and Saint George is characterized by Doric arcade on the facade and bas-reliefs representing the seven Ionian islands along the length of the ledge.
Corfu is symbolized by a ship, Paxi by a trident, Kitira by Aphrodite with a dolphin and the other islands by the faces of their heroes.
All these bas-reliefs were created by Paul Prosalentis.
On the ends of the palace there are two arches, on the left there is Saint George arch, under which cars can pass to reach the old port, while on the right there is Saint Michael arch that leads to an inner garden.

In front of this neoclassical palace there are a garden and a fountain that has in the middle the bronze statue of Sir Frederick Adam, the man who supervised the construction of the aqueduct in the city.
Inside the palace there are a wonderful hall decorated with ionic columns and frescoes with scenes of Odissea and a splendid stairs that brings to the antechamber of the first floor decorated with Corinthian columns.
On the ground floor there are three halls: the ballroom that is round, the Throne Hall and the banquets hall.
There are also on the first floor the Museum of Asian Art, in the east wing an art gallery with works of Corfiots artists of XIX century and also temporary exhibitions, a municipal library and a coffee bar with on the walls maps of great historical and artistic value.

The Liston is an arched stone colonnade in front of the Spianada.
It is the heart of the diurnal and nocturnal life of the old town and beyond the tourists it is also full of Corfiots that come here to drink a coffee and to meet friends. 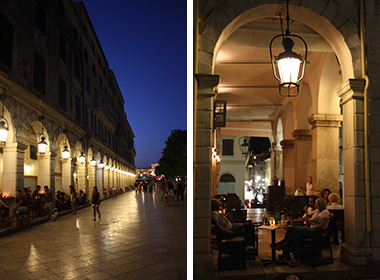 Under the portico there are a lot of nice restaurants and different snack bars to drink a coffee or an aperitif in a beautiful setting.
Mathieu de Lesseps devised and constructed the Liston during the French domination (1807-1814) modelled on the Rue de Rivoli that is a famous road of Paris.
It was completed during the British Protectorate (1815-1864).
The Liston is constituted of two adjacent buildings with a long covered walk that overlooks a wide and paved road.
From the Liston you can admire the garden of the Spianada where Corfiots play cricket and, during the Easter, it becomes a place important for the procession in honour of the Saint patron.

The municipal building is situated in Voulgareos road and overlooks one of the most beautiful public squares of the old town that in the past was the heart of the Corfu life.
Originally the Town hall was the Lodge of the Nobles and today it's the only building that has walls covered with carved stone of Sinies.
Its construction began in 1663 and went on for thirty years.
This building changed several times its use, from society of the nobles became in 1720 the lyric theatre "Saint James" (from the name of the catholic church that is in this square) and then in 1903 was added a floor and became the municipal building of Corfu.

From the architectonic point of view it shows, on the facade and on the back, stone decorations representing masks, historical engravings and other symbols like the emblem of the island (a boat).
On one side of the building there are the mutilated bust of the admiral F. Morosini, the description of his enterprises and also four children around him who symbolize his virtues.
The bust was mutilated due to the wicked bombing of 1687 ordered by the admiral. 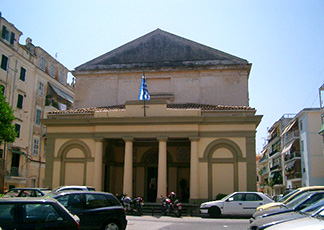 The Ionian Parliament was constructed by Ioanni Chroni in 1855 and it's situated in Mustoxidi road.
This is a neoclassical building characterized by a Doric arcade in the front and engravings in Greek and English on the two sides.
The inscriptions remember the proclamation of the Ionian Islands annexation to the Greece that has been voted just in this building in 1864. After the annexation, the State donated this building that before became a protestant church and later, in 1978, was restored and turned into a Museum dedicated to the freedom fighters of the Ionian Islands. 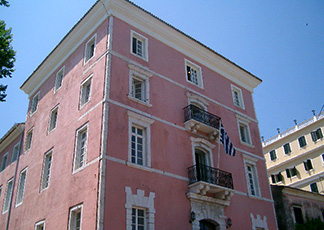 This building date back to XVIII century and in origin it was a Venetian barracks called "Grimani".
In the following century and to be precise in 1824 it became the seat of the Ionian Academy and later, after the unification of the Ionian Islands with Greece, became the municipal Library.
The Ionian Academy was known in all Greece as the centre of a literary rebirth with the head of the poets Solomos and Mavilis.
In 1943 the building was partially destroyed from Italian bombing but it was soon restructured.
Currently it's the seat of Rectorate of the Ionian University, that is the only university in all the Ionian Islands.